Keystone Habits: The Building Blocks For Your Success

“Successful people are simply those with successful habits.” — Brian Tracy

To help all of you get more of the right things done, at the right time, read on to see how you can use keystone habits to reach and exceed your goals.

Why Focus on Habits?

When interested in changing behaviour, the first thing to focus on should be habits. This is because habits are surprisingly powerful. Approximately 45% of all human behaviour is habit-driven. Almost half of what you say, think, feel and do on a daily basis is controlled by habits. It, therefore, follows that changing habits, even one, can have profound changes in your everyday behaviour.

If you want to see the amazing power of habits, look no further than Olympic champion Michael Phelps. According to his coach, every action Phelps takes during a competition, is a step in a planned program.

“The actual race is just another step in a pattern that started earlier that day and has been nothing but victories. Winning is a natural extension.“

Closely following a set pattern may seem tedious, but by focusing on habits, both actions and outcomes become predictable. The ability to develop positive patterns is just one reason why habits are so important when working on behaviour changes.

Another factor in changing behavior is the forgetting curve. While you may not know the name, you certainly know the feeling.

“When I called or visited retail chains a month or two after a training session, to find out how much their behaviour had actually changed; almost everyone was back to their old habits.” – Jan Dahl

Spaced practice, practising numerous times over a time period, can counter this. But spaced practice requires multiple training sessions and/or coach visits, which quickly becomes costly and impractical. When your employees work across multiple locations, cities or even countries, the cost and complexity skyrockets.

So when the staff is gathered or a coach is in store, training is intensive. This is understandable, as everyone wants to learn as much as possible. But unfortunately this compact type of training often leads to information overload. And then the forgetting curve kicks in. 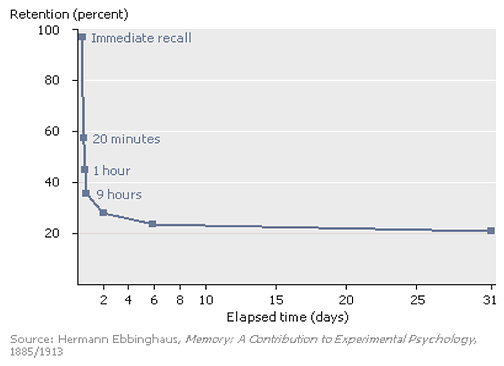 The jury is out on how much is forgotten and how fast. But the fact is, it’s a lot and it happens fast!

Despite the best of intentions, post-training often follows a distinct pattern:

Consider toothbrushing. This is an action most people do 2 times a day, meaning that in just a year, you brush your teeth 730 times. I would venture to say that during at least some of those times, you are on autopilot, performing movements you don’t consciously think about. That’s a habit and a good one at that. The more you do that action, the more embedded it becomes in your daily behaviour.

When you complete habits enough times, the conscious part of the brain virtually shuts down, meaning you are on auto-pilot. This is known as the habit loop and consists of three phases. 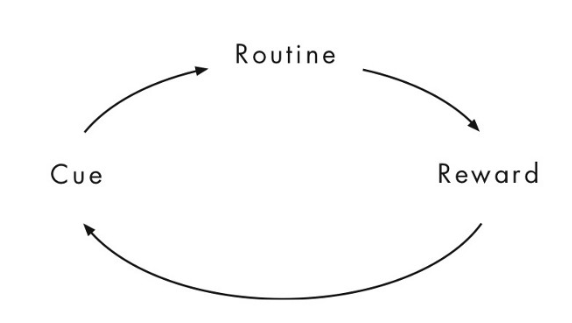 The Cue is what triggers the habitual behaviour. This can be anything from a certain time of the day, being hungry, stressed or with particular people.

The Routine is the habit itself, the action you are performing

The Reward is the pleasurable response from doing the action. This can both be a physical stimulation (such as caffeine) or a positive feeling.

As the loop repeats, habits become ingrained. The key is therefore to repeat positive habit loops. This is where most people falter, as habits are hard to break and hard to change. It is because of this keystone habits are so important.

“Basically, anything can become a keystone habit if it has this power to make you see yourself in a different way.” – Constant Renewal

So what are keystone habits? More than just good habits, they are small yet powerful and have the potential to create a chain of positive reactions. Similar to the butterfly effect, keystone habits are based on the idea that a single, small habit can have profound effects.

The key component to keystone habits is the cumulative effect it has on other parts of your life. One good habit seldom comes alone, and keystone habits are a prime example of this. As one article says: “[Keystone habits] act as the soil from which other good habits grow.”

A classic example of a keystone habit is asking people to write down everything they ate, at least once a week. While this may seem like a small action to take, research has shown that when people keep a food journal, they get a better understanding of their actual food intake, and use the journal as a jumping off-board to gain other positive habits, such as exercise or planning meals. Furthermore, many graduated to keeping a daily food journal, showing how one small decision can have profound effects.

As keystone habits become solidified in your daily routine, it creates a momentum for other positive habits. Despite keystone habits being mainly associated with personal improvement, you can utilize the same basic concepts to improve your own and your staff’s daily work.

But how, I hear you ask.

While it can seem daunting to find and implement one or more keystone habits, this process can be explained through four easy steps.

If personal efficiency is a goal of yours, another potential keystone habit is that of starting each Monday with 10 min of planning, giving you an overview of your workweek. Again, on the surface, this is a rather small habit, but it has the potential to be so much more. Similar to the food journal, this habit normalizes structure and planning

Another powerful keystone habit is meditation. While this does not produce the same physical results as writing down daily meals, meditation has the power to increase willpower, thereby affecting other areas of life.

Adopting keystone habits is just one way to make your work and time more efficient. Nevertheless, it is a powerful way to kick-start life-changes.

If personal efficiency is a topic of interest, why not read on to see how leaders and customer-facing teams use ATOBI to implement keystone habits and create long-term performance lift. You can also book a demo and get a hands-on demonstration of how to use ATOBI to simplify your everyday work life.

Business Gamification: How And Why It Can Improve Your Business

Aug 26, 2019
Employee engagement, Gamification, Motivation
Thank you! We will contact you shortly